The Rev. Don Doll, SJ, is a Jesuit priest and internationally renowned photographer whose work has been featured in National Geographic (“Hunters of the Bering Sea,” June 1984, and “The Athabascans along the Yukon,” February 1990) and several Day in the Life of … books, including America, California, Italy, Ireland, Passage to Vietnam and Christmas in America.

Fr. Doll was introduced to both photography and to the Lakota people when he was assigned to the Rosebud Reservation in South Dakota as a young Jesuit. His books on Native Americans include: Crying for a Vision (Morgan and Morgan, 1976, Dobbs Ferry, NY), and Vision Quest: Men, Women and Sacred Sites of the Sioux Nation (1994, Crown Publishers, New York). He had a Vision Quest CD-ROM published in 1996, and the Vision Quest Exhibit has opened in 20 cities. In September 2012, Magis Productions with Creighton University Press published A Call to Vision: A Jesuit’s Perspective on the World, a 224-page coffee table book showcasing 188 photographs from Fr. Doll’s 50-year career.

Since 1969, Fr. Doll has lived and worked at Creighton University, where he is professor emeritus of journalism and the Charles and Mary Heider Endowed Jesuit Chair.

Read Fr. Doll’s full biography in the PDF download of the School of Dentistry artwork map. His work can be seen on his website: magisproductions.org 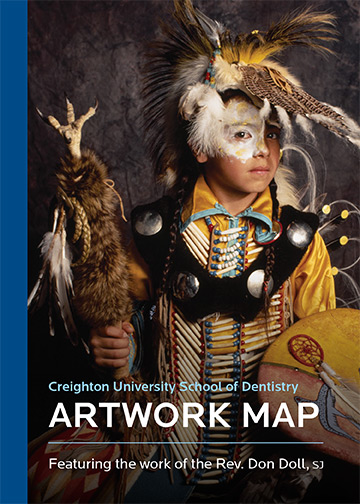